I've done a number of discipline spankings recently.  These are spankings to which these ladies not only agreed, but requested. And yet, as time grew near they protested about the need to be spanked.  Here are some of the things they said as well as my replies.

Why am I getting a spanking?

“You’ve been a pain in the ass long enough. Now it’s time to experience it for yourself.

I don’t think I need a spanking for that.

That’s why I’m in charge and you’re not.

I wasn’t that bad.

Ok. This paddle isn’t that bad either.

I explained why I did that. I had a reason

I already apologized for that. 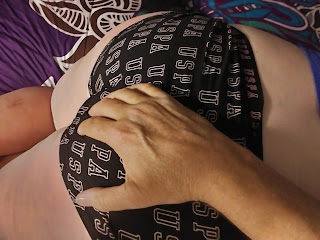 And I appreciated it.  Bend over.

I don’t want anyone to see bruises.

How about just your hand? I mean, that really hurts all by itself because it’s so big and hard

We’re talking about my hand, right?

Can’t we just wipe the slate clean at this point since it has been a while since you’ve seen me?

I don’t want my bottom blistered!

I hear you, little girl. Too bad you weren’t hearing me earlier.

You’re gonna spank my ass for ALL that? Can’t we work something out here?

You mean like an installment plan? How long till I own it?

I know I lied but it was because I was high. I shouldn’t be held accountable for something I did while under the influence.

So... you think being under the influence makes you less guilty???  How would that work out in court?

Say what you think but be respectful.

I've done a number of discipline spankings recently.  These are spankings to which these ladies not only agreed, but requested. And yet,...

Dominant Thoughts
I am Mick McGriffin. I spank women for the simple reason that I enjoy it. I like the sensuality as well as the power dynamic. But I also spank a woman to address her needs. A grown woman may desire a spanking because she likes being dominated--it's a turn-on. It's sensual for some, while others crave the pain. Some don't enjoy the pain but they like what it does for them, such as the endorphin rush afterward. Many are experimenting and need someone trustworthy to help them explore themselves through this activity. Some have many responsibilities and want someone else to take charge if only for the duration of the spanking. Some want to be spanked to assuage guilt over things they've done. Some need it for discipline to help get their lives on track. Others need the emotional release it gives them. These are a Dominant man's reflections on his experience in spanking women. (Please note that I respect everyone's privacy in my writing. Names and details are changed for their protection.)