I spanked Felicity to tears recently, which was a new threshold for us.  It turns out that tears require more than just the sting or force of impact.  From the beginning, she told me that she wished she could have the release that comes from crying.  It took four sessions to get there and she gave me feedback after each session.

“It’s okay to manhandle me more,” she said after another time. She has health issues so I have indeed been a little careful. In fact, I’m careful with everyone, even when I’m forceful.

The next time we met she had been a major pain during the previous week, worrying and pissing off the people in her life, including me, and she warranted a severe punishment. I gave her the paddle, the belt, the force, and the “grrr—all I thought her bottom could take. While she protested loudly, it didn’t bring the tears she wanted, although she felt better afterward (me too). 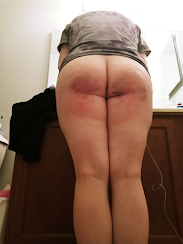 Then there was last time.

She’d had a better week. Not perfect, but much better. She’d been nicer, taken better care of herself, and taken her medicine more regularly.

“Uh huh. I hear you. You’re getting one anyway.”

“You don’t have to make it so severe this time,” she whined.

“You don’t make that decision.”

She can be convincing. Should I put this off, I thought.  I waited for the safe word which would stop everything, but it didn’t come. So over my lap she went… forcefully.

She wiggles a lot so I pinned her legs with one of mine. I had to pull her hands out of the way several times. All standard fare for her.

But things became different.  Her “Ows” were less angry. Fewer smart-aleck retorts. Her voice was higher. And as we reached the threshold, she was saying, “Mick, please, can we stop? Please I can’t take anymore. Please, Mick, it hurts so much…”

But no safe word.

“Eight,” she gasped. “Or eight and a half. Maybe eight and three/forths.”

And then something broke through and the tears came.  Not just tears but sobs that wracked through her. I pulled her upright and held her like she was a kid for a long time and I kissed her cheek.

She had been tired and her resistance was down so that made it a little easier to get there.  And I think having four sessions had built up enough trust to where she felt safe enough to let go.

Since then, she remains a smarty pants, but she seems calmer, and addresses me as “sir” more easily.

I feel like I should say something like, “I hated to do it but it needed to be done.”

But I didn’t hate it.  I kind of loved it.  I brought her to a place she needed to be. I loved spanking her and I loved her whimpers leading up to the tears.  And I loved holding her and telling her it was all going to be okay.

I understand that this does not happen every time with her and that some subs never reach this point. But I'm glad we got there that time.

Say what you think but be respectful.

I spanked Felicity to tears recently, which was a new threshold for us.  It turns out that tears require more than just the sting or force o...

Dominant Thoughts
I am Mick McGriffin. I spank women for the simple reason that I enjoy it. I like the sensuality as well as the power dynamic. But I also spank a woman to address her needs. A grown woman may desire a spanking because she likes being dominated--it's a turn-on. It's sensual for some, while others crave the pain. Some don't enjoy the pain but they like what it does for them, such as the endorphin rush afterward. Many are experimenting and need someone trustworthy to help them explore themselves through this activity. Some have many responsibilities and want someone else to take charge if only for the duration of the spanking. Some want to be spanked to assuage guilt over things they've done. Some need it for discipline to help get their lives on track. Others need the emotional release it gives them. These are a Dominant man's reflections on his experience in spanking women. (Please note that I respect everyone's privacy in my writing. Names and details are changed for their protection.)